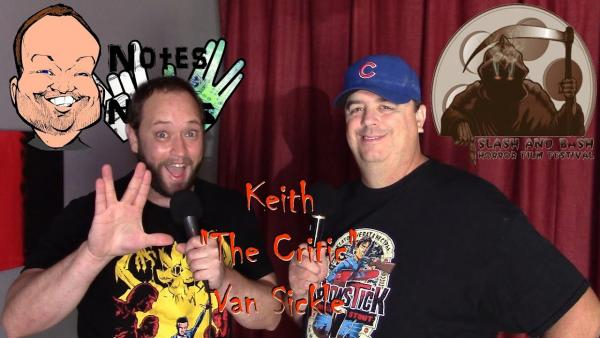 Ketih Van Sickle and Eric Schuetz from Notes and Nerds.

I began my career as a film critic nearly 25 years ago, inspired by my first viewing of Star Wars in 1977 at the old Sunset Drive in Lawrence, KS. I continue towonder how Annie Hall beat Star Wars for best picture that year and demand a re-count!

I got into radio by giving reviews on WIBW radio in Topeka. Later came here to Country Legends 106.9 as not only a film critic, but also Promotions Director and the Morning Show Producer.

Joining forces with Randy Guzman, we created the television show “The Aisle Seat”. The show was very successful and aired on KTWU. We not only discussed movies but also local entertainment and held celebrity interviews. Some of the biggest names I got to interview were: Tom Cruise, Billy Bob Thorton, Will Farrell, and Dakota Fanning.

I suffered a series of strokes in February 2010 and a lingering viral infection that landed me in the hospital and several weeks in intensive care, almost costing me my life. After months of recovery at Kansas Rehabilitation Hospital I regained my ability to speak and write.